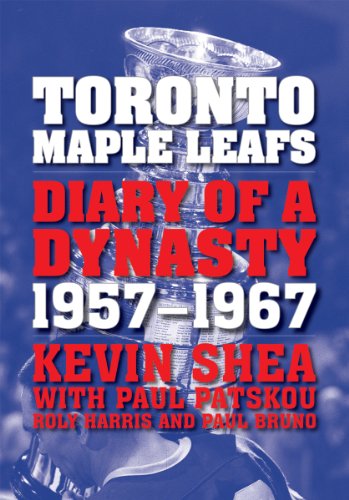 Toronto Maple Leafs: Diary of a Dynasty, 1957-1967 chronicles those wonderful seasons when the Toronto Maple Leafs skyrocketed from last place in the NHL to become the powerhouse team of the decade. During the 1950s and 60s the Leafs were always a contender and won the Stanley Cup in three consecutive years (1962-1964), along with an improbable Stanley Cup victory over their archrival, the Montreal Canadiens, in 1967 to close out the era of the original six NHL teams.

Of the many books written on the Leafs, this one is unique: Kevin Shea and his writing partners revisit all the important games and moments from each season with astonishing detail based on the broadcasts of Hockey Night in Canada from that decade. There are authentic calls from the broadcast booth, Hot Stove Lounge conversations and detailed descriptions of game-changing goals and late-game heroics that
have been obscured by the passage of time -- and the performance of the weaker teams that have followed.

Along with unearthed, never-before released interviews from dynasty players, such as Johnny Bower, Dave Keon and George Armstrong to name only a few, the authors reconstruct Toronto's dynasty years with professional accuracy, authenticity and care.

This big book will be dear to the heart of every Maple Leaf fan -- a nostalgic journey through hockey history and thus into the history of modern Canada itself.