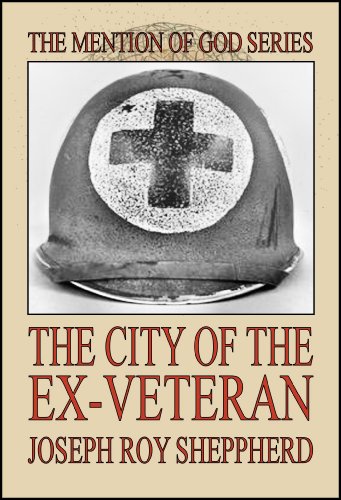 © 2007 Joseph Roy Sheppherd, both text and illustrations. The City Of The Ex-Veteran is the fourth of thirteen books in a series entitled: The Mention of God. This is a collection of independent stories in various styles, genres and lengths, each inspired by one word from a passage from the writings of Bahá'u'lláh:

This fourth story explores the issue of homelessness among veterans, and the processes of retrospection, self-forgiveness, and dealing with the loss of friends. Being set in a time of war, the story portrays personal responses to situations of peril and the role of prayer. The City Of The Ex-Veteran is a work of blended fiction, which combines historical fiction and social fiction. Therefore, the characters introduced here play no biographical roles, they do not portray or infer the real lives of real people. The author is unaware of any similarities in names with actual living personalities. If similarities do exist, it is accidental and inconsequential to the plot. With a world population on Earth of more than seven billion people, speaking several thousands of languages, any combination of vowels and consonants is bound to coincide with someone’s name. Such coincidences do not change the intent of the author, who has created fictitious characters to advance the plot and present his ideas. This is not the case for all the books in this series, some are biographical and autobiographical. These are clearly identified as such. The other titles in the Mention of God series are as follows and may be read in any order:

All of these books are written in English, however, some are available in other languages.